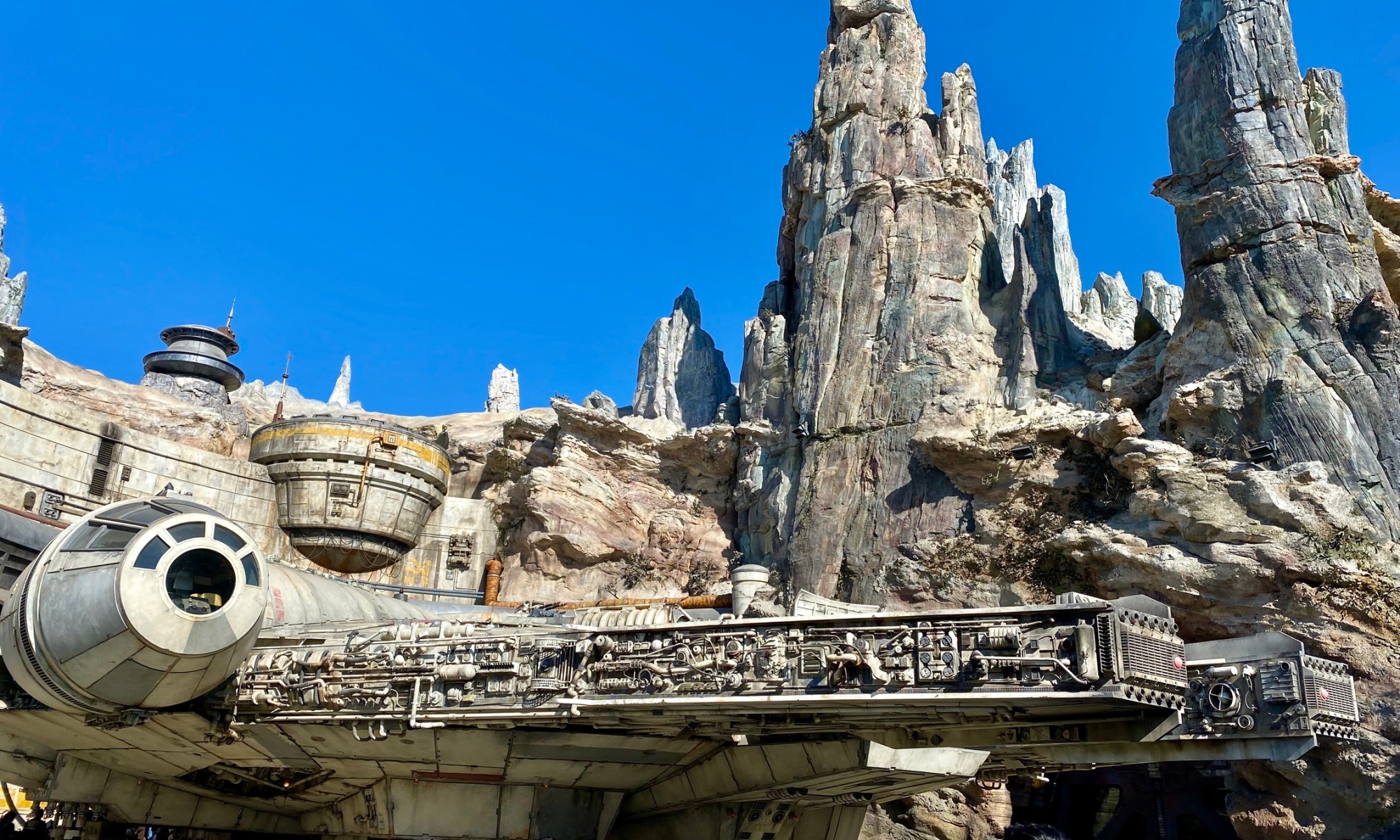 A short time ago, in a theme park 3,000 miles away…STAR WARS. We visited Disneyland in Anaheim, CA in November 2019 to experience Star Wars Galaxy’s Edge. As Star Wars fans from the Original Trilogy and everything to come after, Galaxy’s Edge is a dream come true. You truly have to see and experience it to understand what Disney has achieved.

Galaxy’s Edge is a Wonder of the Moden World

The land is an amazing feat of imagination, art, design, sound, engineering, robotics, logistics, acting, architecture, construction, merchandising, marketing, and project management. I’m sure I’ve missed a few areas. But is it fun? To answer that, you have to understand Disney’s intent.

What’s a land? What did Walt Disney & his Imagineers (imagination engineers) mean in 1955 when they named a part of the park Fantasyland, Tomorrowland, Adventureland, or Frontierland? The land names are the theme to organize a collection of rides and experiences for the guest. The cast members (staff) are themed with the land. Over the years, Disney’s Imagineers have been mostly successful in adhering to each land’s theme, with perhaps Tomorrowland having the worst identity crisis.

Star Wars: Galaxy’s Edge takes the land concept to an entirely new level of immersion. Disney has designed Galaxy’s Edge for Star Wars fans. The experience is primarily aimed at people that discovered Star Wars through the Sequel Trilogy, aka the Age of Resistance, but includes plenty of references and call backs to the Original (piloting the Millennium Falcon!) and Prequel Trilogies (aka the Age of Rebellion and Age of Republic respectively) to satisfy all Star Wars fans.

When you attend Galaxy’s Edge, you’re actually taking part in a Star Wars Story. This story takes place between Episode VIII – The Last Jedi and Episode IX – The Rise of Skywalker. This focus on fans in a Star Wars Story creates friction and/or outright weirdness when visiting Galaxy’s Edge between those that want to go full Westworld (without the murdering robots!) and role play, and those that just want to go on a rides.

You mean I’m an actor?!? Only if you choose to be, mostly…

When you visit Galaxy’s Edge, you are not just walking into a themed land, Disney treats guests as if they are an in-galaxy visitor to Black Spire Outpost on the planet Batuu in the Outer Rim Territories. If even reading that sentence made your head explode in confusion, Galaxy’s Edge might annoy you.

Visitors can choose how much or how little to role play, but it can’t be avoided entirely. The basics of life are themed in galaxy. What do I mean? Cast members are in character as workers of Black Spire Outpost and will only speak to visitors using Star Wars words. I found the experience very similar to visiting another native English speaking country like England or Australia. There are local words that mean the same thing as what your local words mean. If you’ve never left your native country and Galaxy’s Edge is your first exposure to learning new English words for familiar concepts, you might not have a good time.

For example, how do you pay for food, drink, or merchandise? Dollars? Pounds? Nope, you are using Credits. Do you need to use your smartphone for something? That would be a Datapad.

The story so far…

Kylo Ren of The First Order has landed to inspect Black Spire Outpost and look for Resistance fighters. The Resistance has established a base near Black Spire Outpost. Chewbacca has partnered with the smuggler Hondo Ohnaka (a character introduced in the animated Clone Wars TV Show) to fund fixing the notoriously broken Millennium Falcon by looting shipments of Coaxium and smuggling them back to Hondo. That’s the plot of the ride Smuggler’s Run.

The centerpiece of Galaxy’s Edge is a full size Millennium Falcon and it’s beautiful, especially at night. It totally makes sense then that the first ride in Galaxy’s Edge involves the fastest hunk of junk in the galaxy. The first, and at the time of this writing only, mission is too loot a shipment of Coaxium (the starship fuel introduced in Solo: A Star Wars Story).

You begin this mission by snaking through the starport where the Falcon is parked and then boarding the ship itself! Up to six people enter the cockpit and are assigned one of three roles in groups of two:

Gunners and Engineers mash buttons on demand or at will!

Smuggler’s Run uses a giant wrap around projection screen for riders to play a video game. The Falcon cockpit is the most expensive custom video game controller ever made strapped to a motion controller. The game is running on the Unreal video game engine. In 1993 the video game Star Wars: Rebel Assault was released and this feels like a modern version of that game. Rebel Assault was a game on rails, meaning the game moves where it’s programming to and you get to do stuff or not, the amount of time is fixed. That’s kind of the perfect model for a theme park ride.

Smuggler’s Run does have some variability based on how quickly you push buttons when told to do so. If you are in the critical pilot or co-pilot roles, be prepared for people to be very mad at you if you don’t hit the brake button.

There’s no doubt it’s fun, but it’s not thrilling. We came away excited and happy, but you’re not going to get a roller coaster high. That’s ok, you’re flying the Millennium Falcon! You’ll want to fly it at least 4 times so you can fly as pilot, co-pilot, engineer, and gunner. Past that though, since there’s only one mission at the time of this writing. Smuggler’s Run really needs to add a dose of Star Tours randomness to keep people coming back visit after visit. I’m sure there are many missions Chewy can run for Hondo.

When we visited Star Wars: Galaxy’s Edge, the opening of Rise of the Resistance had been delayed until Jan 17, 2020 in Disneyland. The ride opened on Dec 5, 2019 in Disney’s Hollywood Studios in Florida. From many accounts the ride is unlike any other. This, like all of Galaxy’s Edge, is also a role playing story based dark ride. Your resistance transport departing Batuu is captured by Kylo Ren’s Star Destroyer and you have to escape.

Disney’s grand ambition for the ride is also its biggest weakness. The ride has been plagued by breakdowns, bugs, and limited capacity. Rise of the Resistance is an 18 minute long ride. Riders walk and then ride a trackless vehicle that only has a capacity of 8. The only way to get on the ride is by using the Disneyland (App Store, Google Play) or My Disney Experience – Walt Disney World (App Store, Google Play) app to join a boarding group.

Boarding Groups are a virtual queue which assigns you a time to join the actual line. Unlike Savi’s Workshop to make a lightsaber or Oga’s Cantina where you can book up to 2 weeks ahead of park arrival for a time slot, joining a boarding group has to be done in the park.

We know of multiple friends and family that planned a trip to either Disneyland or Walt Disney World but couldn’t join a boarding group to ride Rise of the Resistance. These are people that entered the line to get into the park an hour or more before it opened, yet the rides capacity was gone in less than 30 seconds. Peak holiday times or just a random weekend, didn’t matter. Worse, many people have been able to join a boarding group at park open only to have their boarding group cancelled because of technical issues. Imagine the excitement of making it into a boarding group, the expectation of experiencing the very thing your trip to Disney is for, only to have those dreams cancelled.

With the amount of money you’re spending to enter the park, getting onto Rise of the Resistance is like playing a very expensive slot machine. Disney should try out some new slogans for the boarding group experience:

How about a new song?

Rise of the Resistance is one of the world’s most complicated software and engineering projects. As a software developer, I would have been astounded if the ride opened without breakdowns and bugs. What’s the difference between a breakdown and a bug? Breakdowns are full ride closures and Rise of Resistance is breaking down a lot. Bugs are when the ride isn’t completely broken down but parts of the ride aren’t working. One of the most prevalent is the Kylo Ren animatronic not working. Since he’s the main villain, I’d say the illusion is sufficiently destroyed by something that is supposed to do something clearly not.

We greatly enjoyed making lightsaber’s in Savi’s Workshop. Yes it’s very expensive, $200 + tax for the lightsaber and the experience, but Disney got this one right. You get to choose between a variety of lightsaber handle styles and crystal colors to construct your saber.

The experience is very reverent. There are a few surprises that I won’t spoil here, but suffice it to say you will definitely feel like a Jedi.

The only real downside I can see (irrespective of money) is the customer service experience if your lightsaber breaks. We built three laser swords and out of the three dozen parts we had, we had multiple non-working parts. What happens if a lightsaber part breaks at home? You have to take the lightsaber back to a Disney park for servicing. If you don’t live near Orlando or Anaheim, you’re going to have to rely on the Internet, and not Disney, for spare parts.

Galaxy’s Edge has some of the best theme park food I’ve ever had. Docking Bay 7 has fantastic meals. Ronto Roasters has great quick food. The blue and green milk are very tasty.

The centerpiece to the dining experience though was expected to be Oga’s Cantina. While the environment is amazing and alcoholic drinks are welcome, they are very pricey and there aren’t many food choices. You are limited to about 20 minutes in the cantina.

That’s all kind of acceptable, but the greatest offense is that the cantina is so packed with people in assigned seats that you can’t roam at all. Worse, there are no aliens or droids so the entire environment feels too static.

I was happy I went to the cantina but unless Disney makes some changes, I don’t think we’d go back.

Droid Depot is not the nearly religious experience that Savi’s Workshop is. Instead it’s a more rough and tumble fast paced build your own about foot tall droid for $100 + tax.

It’s fun to pick out parts in all kinds of colors and droid styles. The assembly droids look good and are great at driving pets crazy.

You can also buy a full size R2-D2 for crazy money. I believe the sign near the R2 model said don’t touch, but of course kids are not going to read that!

Conclusion – Incredible now, but still room to get even better

Galaxy’s Edge is an incredible experience. If I lived near Orlando or Anaheim, I’d buy an annual pass and go back all the time. While there are problems and deficiencies with the current experience, Disney has left room for expansion. They’ve already started deploying a roaming R2-D2:

Once Rise of the Resistance opened, park attendance increased 2% and revenue rose 10%. With numbers like that, Disney will surely be investing for years to come to improve and expand Galaxy’s Edge.

I’d recommend monitoring these developments to plan your trips to Disneyland and/or Walt Disney World. You don’t want to spend an enormous sum on a Disney trip to arrive and just miss the next big addition to Galaxy’s Edge, or visit when that attraction is having a tough time staying running.